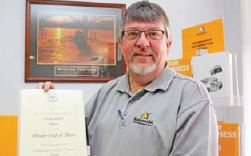 Rotary Club of Berri’s Andrew Gower with the certificate received
for winning the Events Award at a state presentation on Monday 22 October 2012.

THE Riverland and Mallee Vocational Awards was recognised
with a state honour on Monday night at the Premier’s
Community Service Awards.

The Berri Rotary Club,which organises the awards,
took home Best Event at the
prestigious night held in Glenelg.
Rotary Club of Berri’s Andrew Gower said the win acknowledges
the importance of the event to the region.

“This is just recognition for what has almost
become an institution in the Riverland,” Mr Gower said.

“Just recognising the fact that it has been around for 29
years and that it’s important to the region, it gives recognition
to trainees and apprentices, who in a lot of cases, it
started them off on their career paths.”

Mr Gower paid homage to the Rotary Club of Renmark
who initially ran the event for over 25 years.
The 2013 Riverland and Mallee Vocational Awards
nominations are still being accepted with Mr Gower
stating they have received a good number of applications
for the February 8 event